Smith Sinks Teeth Into "I Am Legend"

Actor Will Smith stars in the upcoming feature "I Am Legend".

The Warners production is based on author Richard Matheson's 1954 novel and will be directed by Francis "Constantine" Lawrence.

Premise of the original story, set in a Los Angeles of the 'future' circa 1976–1979, follows 'Robert Neville', the only apparent survivor of a pandemic caused by a deadly 'vampiric' bacterium. Neville lives in a house fortified against nocturnal attacks, only venturing out during the day to stock up on supplies and to kill sleeping vampires.

The novel is unique in vampire fiction as Matheson offers a scientific basis for aversions to garlic, the craving of fresh blood and a vulnerability to sunlight.

Eventually, the despairing Neville discovers that while he IS the only person immune to the bacterium, he is not the only one still alive, having become a fearful figure that has killed both vampires and the infected.

Writer Akiva Goldsman of "Da Vinci Code" fame has been working on a draft from a screenplay by Mark Protosevich. Goldsman will also produce "I Am Legend" with Erwin Stoff, David Heyman and Neal Moritz.

Goldsman and Smith had worked together before on the Vancouver-shot "I, Robot".

"I Am Legend" was previously filmed as "The Last Man on Earth" starring Vincent Price (1964) and "The Omega Man" starring Charlton Heston (1971).

Warners plans an early 2007 start date on the film to be shot in New York.

Take a look at "Into The Badlands" actress Emily Beecham posing for the May 2021 issue of the Sunday Times "Style" maga... 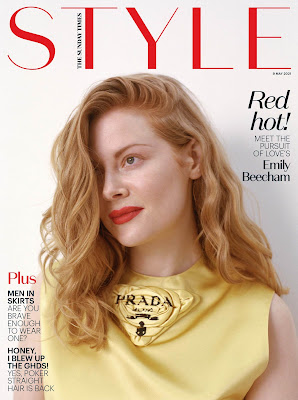