Marvel's "Shang-Chi and the Legend of the Ten Rings"

"...'Fin Fang Foom' is an alien being from the world of 'Kakaranathara', aka 'Maklu IV', in the 'Maklu' star-system of the 'Greater Magellanic Cloud'. The aliens arrive on Earth in ancient China, intending to conquer the planet. Using their natural shape-shifting powers to mimic human form, the aliens infiltrate human society to study it before beginning their conquest. 'Foom', the navigator, is the exception and acting as a reserve is placed in a tomb in a catatonic state.

"The Makluan vessel is eventually found by a man who steals ten sophisticated rings from it, and becomes the supervillain 'Mandarin'. The Mandarin is directed to the 'Valley of the Sleeping Dragon' by a man called 'Chen Hsu', who is actually the captain of Foom's vessel. The Mandarin finds and wakes Fin Fang Foom, using the dragon to threaten the Chinese government.

"Fin Fang Foom helps the Mandarin take control of one third of China, and is then revealed as an alien of Kakaranathara. With "Chen Hsu", whose true form is also revealed, the pair begin to summon the rest of the crew, who had been disguised as humans for centuries..."

“Dan Dare”- Pilot of the Future 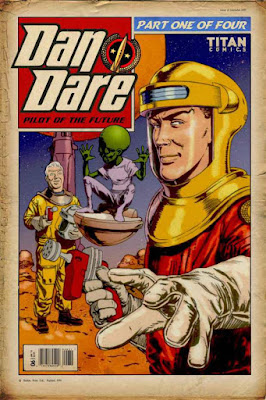