Take a look at footage from the Season 2 finale episode of "Titans", directed by Carol Banker, based on the DC Comics superhero team, now streaming on "DC Universe": 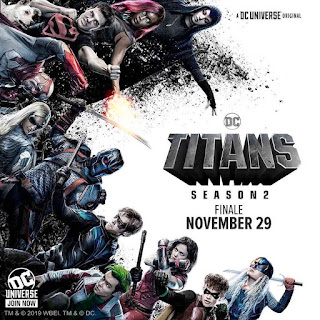 "...'Rose' helps 'Dick' fight 'Deathstroke' and kills him, while 'Jericho' jumps into her body as their father dies.

"Advertising him as a supersoldier to potential bidders, 'Mercy' has the brainwashed 'Conner' defeat 'Gar' at the carnival before sending Conner after the 'Titans' when they intervene.

"The team frees Gar and Conner from their brainwashing and defeats 'Cadmus', but 'Donna' is fatally electrocuted when she prevents a damaged transmission tower from landing on civilians.

In the aftermath, 'Rachel' leaves for 'Themyscira' with Donna's body in an attempt to resurrect her...

"Elsewhere, 'Blackfire' arrives on Earth by taking over the body of an unsuspecting woman..."

Click the images to enlarge and Sneak Peek "Titans"...