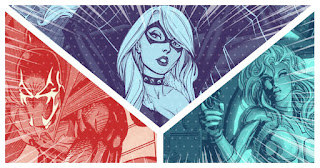 "We have the next seven or eight years laid out as to what we’re going to do with that asset", said Sony Pictures Entertainment chairman Tony Vinciquerra about the studio's "Spider-Man" spin-off movie rights. "And that will not only be on the film side -- it’ll be on the TV side as well. Our television group will have its own set of characters from within that universe that we will seek to develop."

"...and deciding to follow in her father's footsteps as a master thief, adopted her costumed identity as the 'Black Cat'..."