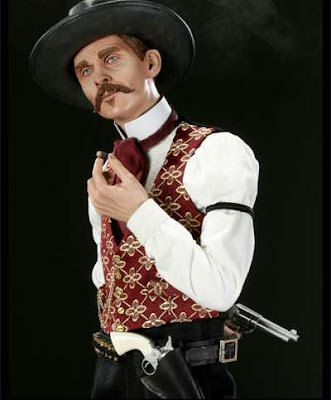 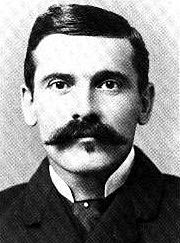 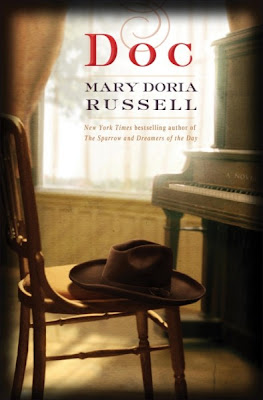 'John Henry Holliday' was born in 1851 in Griffin Georgia. In 1872, after earning his 'Doctor of Dental Surgery', he opened an office in Atlanta with a fellow graduate, but was diagnosed with tuberculosis. 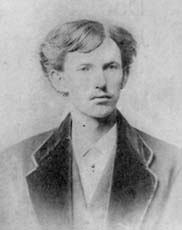 Hoping to gain some more years of life, he moved to Dallas, Texas, but his illness forced him to find other ways to live and he became an avid gambler, while learning how to handle a 'six-shooter' gun. 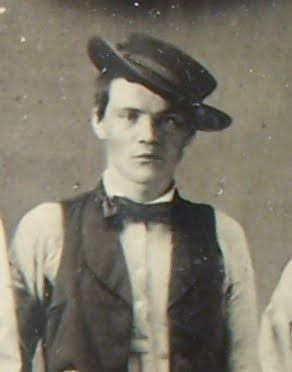 In 1875, Holliday killed a well known citizen, forcing him to flee Dallas under the pursuit of lawmen. In Jackson, he became a card dealer. After killing several people, including a soldier from nearby Fort Richardson, he fled to Denver, changing his name and dealing cards at a place called 'Babbitt's House', until he got into a knife fight with 'Bud Ryan'. Doc was forced to run again, traveling to Wyoming, New Mexico, and Fort Griffin, Texas. 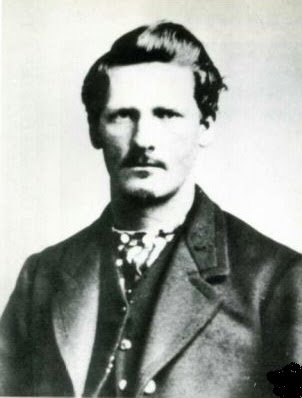 In Fort Griffin, he met prostitute Kate, as well as Wyatt Earp. Doc helped Wyatt to find evidence on a man wanted for train robbery and the two became fast friends. During this time, at a card game, a man named 'Ed Bailey' pulled his pistol, but not before Doc disemboweled him with his knife. Doc was arrested, but Kate set fire to a shed, and during the distraction, she went into the jail and held the guard at gunpoint as she freed Doc. The pair then fled the town on stolen horses.

Doc then took up dealing cards at the Texas Long Branch Saloon and Kate went back to whoring. 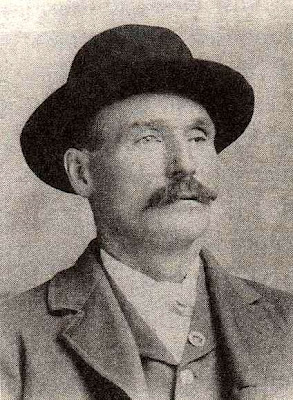 After an argument with Kate, Doc took off for Trinidad, Colorado. A man named 'Kid Colton' harassed Doc into a fight and Doc killed him with two shots. He fled immediately to Las Vegas, New Mexico. In 1879, he started up his dentistry practice again, but it closed not long after. He bought a saloon on Center Street, but soon got into a fight with a man named 'Mike Gordon'. After killing Gordon, a lynch mob gathered, looking to hang him. 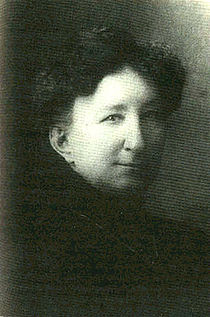 Fleeing to Prescott, Doc made a run at a poker table, and with Kate and $40,000 in gambling money, headed out to Tombstone, with Kate opening the town's first brothel. 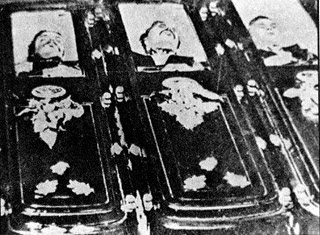 In 1881, when the 'gunfight' @ the 'O.K. Corral' occurred, cowboys threatened to kill the Earps and Doc if they didn't leave town. By the end of the fight, cowboys 'Joseph Clanton', 'Robert McLaury' and 'Thomas McLaury' were dead. 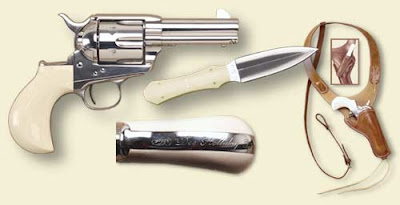 Wyatt teamed up with Doc and some other men to become federal marshals with a goal of destroying the cowboy gang. By March 24th, the posse had killed 'Curly Bill', the leader of the gang, and a number of other members. Satisfied with their redemption, Doc and Wyatt went to Denver. 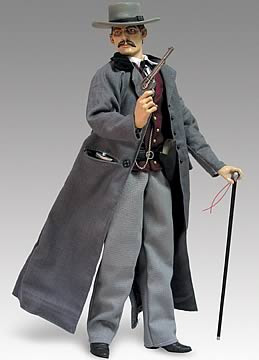 Shortly after arriving, Doc was arrested by 'Perry Mallan' and spent some time in prison. He was eventually released and left for Leadville, Arizona. He ran into old foes, 'Billy Allen' and 'Johnny Tyler', both from Tombstone. On August 19, 1884, Doc went into 'Hyman's Saloon' and stood at the end of the bar. As Allen walked across the bar towards him, Doc killed him. Since he had been publicly threatened by Allen, no charges were pressed. 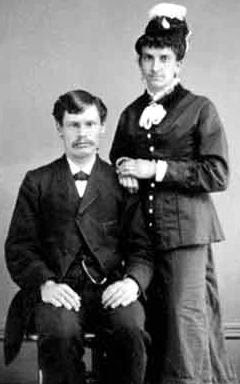 May 1887, Doc went to Glenwood Springs to try using sulfur vapors to clear his tuberculosis symptoms, spending his last days in bed, often delirious. On November 8, 1887, he woke up and drank down a glass of whiskey. After saying "this is funny," he was dead. 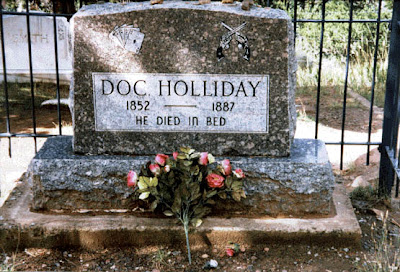